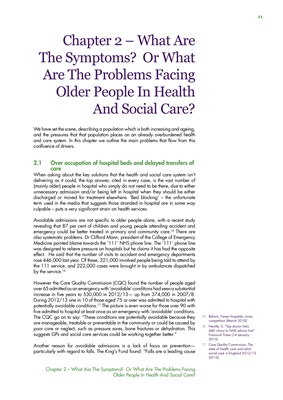 The Symptoms? Or What

Are The Problems Facing

We have set the scene, describing a population which is both increasing and ageing,

and care system. In this chapter we outline the main problems that flow from this

2.1 Over occupation of hospital beds and delayed transfers of

delivering as it could, the top answer, cited in every case, is the vast number of

(mainly older) people in hospital who simply do not need to be there, due to either

discharged or moved for treatment elsewhere. 'Bed blocking' - the unfortunate

Avoidable admissions are not specific to older people alone, with a recent study

emergency could be better treated in primary and community care.15 There are

effect. He said that the number of visits to accident and emergency departments

the 111 service, and 222,000 cases were brought in by ambulances dispatched

potentially avoidable conditions.17 The picture is even worse for those over 90 with

five admitted to hospital at least once as an emergency with 'avoidable' conditions.

The CQC go on to say: "These conditions are potentially avoidable because they

are manageable, treatable or preventable in the community or could be caused by

poor care or neglect, such as pressure sores, bone fractures or dehydration. This

suggests GPs and social care services could be working together better."

particularly with regard to falls. The King's Fund found: "Falls are a leading cause

state of health care and adult