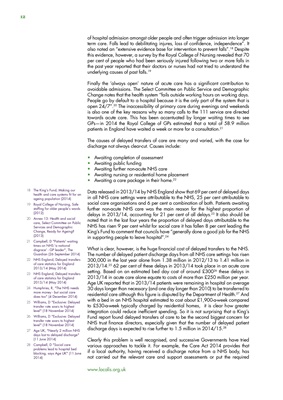 also noted an "extensive evidence base for intervention to prevent falls".18 Despite

this evidence, however, a survey by the Royal College of Nursing revealed that 70

underlying causes of past falls.19

avoidable admissions. The Select Committee on Public Service and Demographic

Change notes that the health system "fails outside working hours on working days.

open 24/7".20 The inaccessibility of primary care during evenings and weekends

towards acute care. This has been accentuated by longer waiting times to see

GPs-in 2014 the Royal College of GPs estimated that a total of 58.9 million

patients in England have waited a week or more for a consultation.21

The causes of delayed transfers of care are many and varied, with the case for

discharge not always clear-cut. Causes include:

• Awaiting a care package in their home.22

social care organisations and 6 per cent a combination of both. Patients awaiting

in supporting people to leave hospital".24

What is clear, however, is the huge financial cost of delayed transfers to the NHS.

setting. Based on an estimated bed day cost of around £30026 these delays in

residential care although this figure is disputed by the Department of Health.27 And

with a bed in an NHS hospital estimated to cost about £1,900-a-week compared

to £530-a-week typically charged by residential homes, it is clear how greater

integration could reduce inefficient spending. So it is not surprising that a King's

NHS trust finance directors, especially given that the number of delayed patient

Clearly this problem is well recognised, and successive Governments have tried

various approaches to tackle it. For example, the Care Act 2014 provides that

if a local authority, having received a discharge notice from a NHS body, has

18 The King's Fund, Making our

times on NHS 'a national