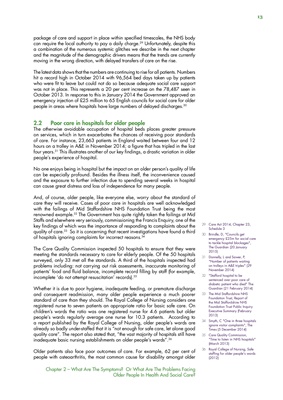 package of care and support in place within specified timescales, the NHS body

can require the local authority to pay a daily charge.29 Unfortunately, despite this

moving in the wrong direction, with delayed transfers of care on the rise.

The latest data shows that the numbers are continuing to rise for all patients. Numbers

October 2013. In response to this in January 2014 the Government approved an

people in areas where hospitals have large numbers of delayed discharges.30

on services, which in turn exacerbates the chances of receiving poor standards

of care. For instance, 23,663 patients in England waited between four and 12

hours on a trolley in A&E in November 2014; a figure that has tripled in the last

four years.31 This illustrates another of our key findings, a drastic variation in older

can be especially profound. Besides the illness itself, the inconvenience caused

can cause great distress and loss of independence for many people.

And, of course, older people, like everyone else, worry about the standard of

care they will receive. Cases of poor care in hospitals are well acknowledged

renowned example.32 The Government has quite rightly taken the failings at Mid

Staffs and elsewhere very seriously, commissioning the Francis Enquiry, one of the

quality of care.33 So it is concerning that recent investigations have found a third

meeting the standards necessary to care for elderly people. Of the 50 hospitals

surveyed, only 33 met all the standards. A third of the hospitals inspected had

problems including: not carrying out risk assessments, inaccurate monitoring of

incomplete 'do not attempt resuscitation' records).35

Whether it is due to poor hygiene, inadequate feeding, or premature discharge

and consequent readmission, many older people experience a much poorer

standard of care than they should. The Royal College of Nursing considers one

registered nurse to seven patients an appropriate ratio for basic safe care. On

children's wards the ratio was one registered nurse for 4.6 patients but older

people's wards regularly average one nurse for 10.3 patients. According to

a report published by the Royal College of Nursing, older people's wards are

already so badly under-staffed that it is "not enough for safe care, let alone good

quality care". The report also stated that, "the vast majority of hospitals still have

Older patients also face poor outcomes of care. For example, 62 per cent of

people with osteoarthritis, the most common cause for disability amongst older

32 "Stafford hospital to be

sentenced over poor care of

diabetic patient who died" The

34 Smyth, C "One in three hospitals

"Time to listen in NHS hospitals"