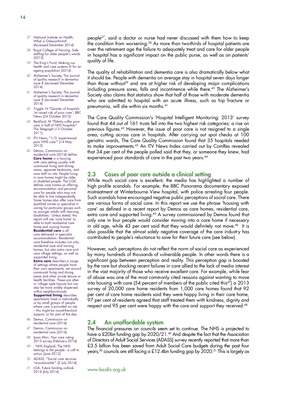 people37, said a doctor or nurse had never discussed with them how to keep

the condition from worsening.38 As more than two-thirds of hospital patients are

in hospital has a significant impact on the public purse, as well as on patients'

it should be. People with dementia on average stay in hospital seven days longer

including pressure sores, falls and incontinence while there.40 The Alzheimer's

who are admitted to hospital with an acute illness, such as hip fracture or

pneumonia, will die within six months.41

found that 44 out of 161 trusts fell into the two highest risk categories; a rise on

previous figures.42 However, the issue of poor care is not resigned to a single

area, cutting across care in hospitals. After carrying out spot checks at 100

to make improvements.43 An ITV News Index carried out by ComRes revealed

that 34 per cent of the people polled said that they, or someone they knew, had

experienced poor standards of care in the past two years.44

2.3 Cases of poor care outside a clinical setting

While much social care is excellent, the media has highlighted a number of

Such scandals have encouraged negative public perceptions of social care. There

are various forms of social care. In this report we use the phrase 'housing with

care' as defined in a recent report by Demos as care homes, residential care,

extra care and supported living.45 A survey commissioned by Demos found that

in old age, while 43 per cent said that they would definitely not move.46 It is

contributed to people's reluctance to save for their future care (see below).

However, such perceptions do not reflect the norm of social care as experienced

by many hundreds of thousands of vulnerable people. In other words there is a

significant gap between perception and reality. This perception gap is boosted

in the vast majority of those who receive excellent care. For example, while fear

per cent of care home residents said they were happy living in their care home,

97 per cent of residents agreed that staff treated them with kindness, dignity and

respect and 95 per cent were happy with the care and support they received.48

The financial pressures on councils seem set to continue. The NHS is projected to

£3.5 billion has been saved from Adult Social Care budgets during the past four

39 The King's Fund, Making our

of quality research in dementia

of quality research in dementia

care in half of NHS hospitals"

Care home is a housing

with care setting usually with

or disabled people. The CQC

care for people who may not

be able to live independently.

Some homes also offer care from

qualified nurses or specialise in

caring for particular groups such

as younger adults with learning

disabilities.' Unless stated, this

report will use 'care home' to

refer to both residential care

Residential care is all

care therefore includes not only

homes, but also extra care and

care village settings, as well as

of settings where people have

their own apartments, set around

areas and other on-site leisure or

health facilities. These are often

in 'village'-style layouts but can

or by small groups of people

where care is provided on site

support, or for part of the day.

belongs to the people - a call to