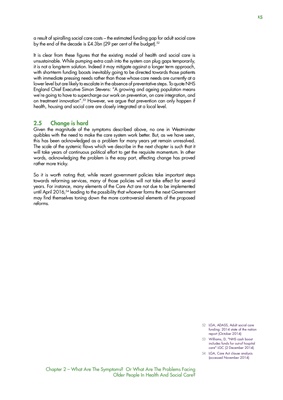 unsustainable. While pumping extra cash into the system can plug gaps temporarily,

it is not a long-term solution. Indeed it may mitigate against a longer term approach,

lower level but are likely to escalate in the absence of preventative steps. To quote NHS

we're going to have to supercharge our work on prevention, on care integration, and

on treatment innovation".53 However, we argue that prevention can only happen if

health, housing and social care are closely integrated at a local level.

Given the magnitude of the symptoms described above, no one in Westminster

quibbles with the need to make the care system work better. But, as we have seen,

this has been acknowledged as a problem for many years yet remain unresolved.

will take years of continuous political effort to get the requisite momentum. In other

words, acknowledging the problem is the easy part, effecting change has proved

So it is worth noting that, while recent government policies take important steps

towards reforming services, many of those policies will not take effect for several

years. For instance, many elements of the Care Act are not due to be implemented

until April 2016,54 leading to the possibility that whoever forms the next Government