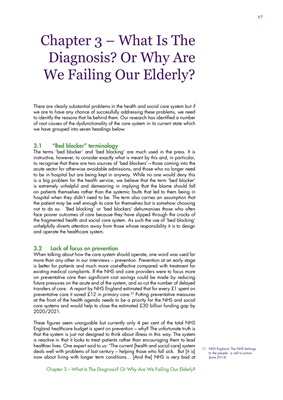 Diagnosis? Or Why Are

We Failing Our Elderly?

we are to have any chance of successfully addressing these problems, we need

to identify the reasons that lie behind them. Our research has identified a number

we have grouped into seven headings below.

The terms 'bed blocker' and 'bed blocking' are much used in the press. It is

instructive, however, to consider exactly what is meant by this and, in particular,

acute sector for otherwise avoidable admissions, and those who no longer need

to be in hospital but are being kept in anyway. While no one would deny this

is a big problem for the health service, we believe that the term 'bed blocker'

hospital when they didn't need to be. The term also carries an assumption that

not to do so. 'Bed blocking' or 'bed blockers' dehumanises those who often

the fragmented health and social care system. As such the use of 'bed blocking'

and operate the healthcare system.

3.2 Lack of focus on prevention

When talking about how the care system should operate, one word was used far

more than any other in our interviews - prevention. Prevention at an early stage

existing medical complaints. If the NHS and care providers were to focus more

future pressures on the acute end of the system, and so cut the number of delayed

transfers of care. A report by NHS England estimated that for every £1 spent on

England healthcare budget is spent on prevention - why? The unfortunate truth is

that the system is just not designed to think about illness in this way. The system

healthier lives. One expert said to us: "The current [health and social care] system

deals well with problems of last century - helping those who fall sick. But [it is]

to the people - a call to action