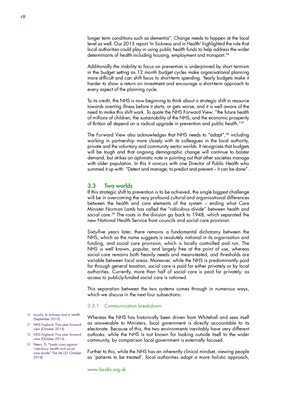 longer term conditions such as dementia". Change needs to happen at the local

level as well. Our 2013 report 'In Sickness and in Health' highlighted the role that

determinants of health including housing, employment and transport.56

more difficult and can shift focus to short-term spending. Yearly budgets make it

every aspect of the planning cycle.

To its credit, the NHS is now beginning to think about a strategic shift in resource

towards averting illness before it starts, or gets worse, and it is well aware of the

need to make this shift work. To quote the NHS Forward View: "the future health

of millions of children, the sustainability of the NHS, and the economic prosperity

of Britain all depend on a radical upgrade in prevention and public health."57

The Forward View also acknowledges that NHS needs to "adapt",58 including

working in partnership more closely with its colleagues in the local authority,

private and the voluntary and community sector worlds. It recognises that budgets

demand, but strikes an optimistic note in pointing out that other societies manage

with older population. In this it concurs with one Director of Public Health who

summed it up with: "Detect and manage; to predict and prevent - it can be done".

If this strategic shift to prevention is to be achieved, the single biggest challenge

will be in overcoming the very profound cultural and organisational differences

Minister Norman Lamb has called the "ridiculous divide" between health and

social care.59 The roots in the division go back to 1948, which separated the

Sixty-five years later, there remains a fundamental dichotomy between the

NHS, which as the name suggests is resolutely national in its organisation and

funding, and social care provision, which is locally controlled and run. The

NHS is well known, popular, and largely free at the point of use, whereas

social care remains both heavily needs and means-tested, and thresholds are

variable between local areas. Moreover, while the NHS is predominantly paid

for through general taxation, social care is paid for either privately or by local

authorities. Currently, more than half of social care is paid for privately, as

This separation between the two systems comes through in numerous ways,

which we discuss in the next four subsections:

as answerable to Ministers, local government is directly accountable to its

electorate. Because of this, the two environments inevitably have very different

outlooks: while the NHS is not known for looking outside itself to the wider

Further to this, while the NHS has an inherently clinical mindset, viewing people

as 'patients to be treated', local authorities adopt a more holistic approach,

56 Localis, In sickness and in health