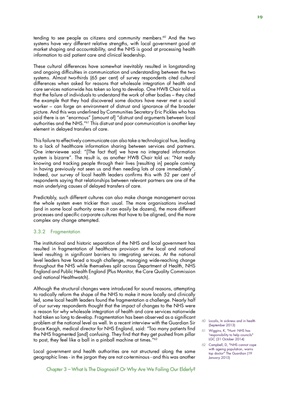 tending to see people as citizens and community members.60 And the two

market shaping and accountability, and the NHS is good at processing health

These cultural differences have somewhat inevitably resulted in longstanding

and ongoing difficulties in communication and understanding between the two

differences when asked for reasons that wholesale integration of health and

care services nationwide has taken so long to develop. One HWB Chair told us

picture. And this was underlined by Communities Secretary Eric Pickles who has

authorities and the NHS."61 This distrust and poor communication is another key

element in delayed transfers of care.

This failure to effectively communicate can also take a technological hue, leading

to a lack of healthcare information sharing between services and partners.

One interviewee said: "[The fact that] we have no integrated information

system is bizarre". The result is, as another HWB Chair told us: "Not really

knowing and tracking people through their lives [resulting in] people coming

in having previously not seen us and then needing lots of care immediately".

Indeed, our survey of local health leaders confirms this with 52 per cent of

respondents saying that relationships between relevant partners are one of the

Predictably, such different cultures can also make change management across

the whole system even trickier than usual. The more organisations involved

(and in some local authority areas it can easily be dozens), the more different

processes and specific corporate cultures that have to be aligned, and the more

resulted in fragmentation of healthcare provision at the local and national

level resulting in significant barriers to integrating services. At the national

throughout the NHS while themselves split across Department of Health, NHS

Although the structural changes were introduced for sound reasons, attempting

led, some local health leaders found the fragmentation a challenge. Nearly half

had taken so long to develop. Fragmentation has been observed as a significant

problem at the national level as well. In a recent interview with the Guardian Sir

the NHS fragmented [and] confusing. They find that they get pushed from pillar

Local government and health authorities are not structured along the same

60 Localis, In sickness and in health