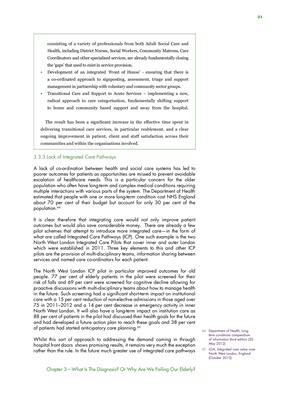 poorer outcomes for patients as opportunities are missed to prevent avoidable

escalation of healthcare needs. This is a particular concern for the older

population who often have long-term and complex medical conditions requiring

multiple interactions with various parts of the system. The Department of Health

outcomes but would also save considerable money. There are already a few

what are called Integrated Care Pathways (ICP). One such example is the two

which were established in 2011. Three key elements to this and other ICP

pilots are the provision of multi-disciplinary teams, information sharing between

services and named care co-ordinators for each patient.

people. 77 per cent of elderly patients in the pilot were screened for their

proactive discussions with multi-disciplinary teams about how to manage health

in the future. Such screening had a significant short-term impact on institutional

North West London. It will also have a long-term impact on institution care as

rather than the rule. In the future much greater use of integrated care pathways

Coordinators and other specialised services, are already fundamentally closing

the 'gaps' that used to exist in service provision.

• Development of an integrated 'Front of House' - ensuring that there is

a co-ordinated approach to signposting, assessment, triage and support

management in partnership with voluntary and community sector groups.

• Transitional Care and Support to Acute Services - implementing a new,

to home and community based support and away from the hospital.

delivering transitional care services, in particular reablement, and a clear

ongoing improvement in patient, client and staff satisfaction across their

communities and within the organisations involved.