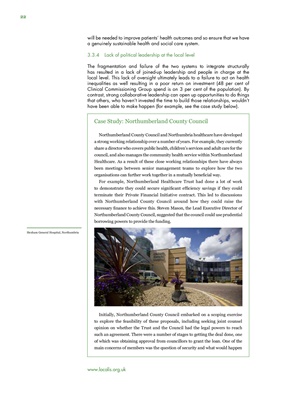 3.3.4 Lack of political leadership at the local level

The fragmentation and failure of the two systems to integrate structurally

local level. This lack of oversight ultimately leads to a failure to act on health

Clinical Commissioning Group spend is on 3 per cent of the population). By

contrast, strong collaborative leadership can open up opportunities to do things

that others, who haven't invested the time to build those relationships, wouldn't

have been able to make happen (for example, see the case study below).

a strong working relationship over a number of years. For example, they currently

share a director who covers public health, children's services and adult care for the

council, and also manages the community health service within Northumberland

Healthcare. As a result of these close working relationships there have always

been meetings between senior management teams to explore how the two

organisations can further work together in a mutually beneficial way.

For example, Northumberland Healthcare Trust had done a lot of work

to demonstrate they could secure significant efficiency savings if they could

terminate their Private Financial Initiative contract. This led to discussions

with Northumberland County Council around how they could raise the

necessary finance to achieve this. Steven Mason, the Lead Executive Director of

Northumberland County Council, suggested that the council could use prudential

borrowing powers to provide the funding.

to explore the feasibility of these proposals, including seeking joint counsel

such an agreement. There were a number of stages to getting the deal done, one

of which was obtaining approval from councillors to grant the loan. One of the