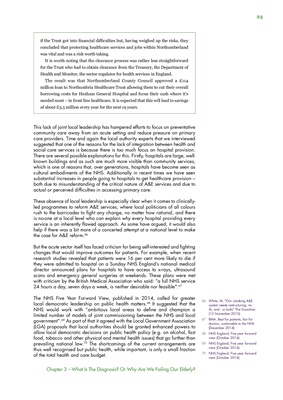 care providers. Time and again the local authority experts that we interviewed

social care services is because there is too much focus on hospital provision.

There are several possible explanations for this. Firstly, hospitals are large, wellknown buildings

and as such are much more visible than community services,

which is one of reasons that, over generations, hospitals have become seen as

cultural embodiments of the NHS. Additionally in recent times we have seen

substantial increases in people going to hospitals to get healthcare provision -

A&E services, where local politicians of all colours

rush to the barricades to fight any change, no matter how rational, and there

service is an inherently flawed approach. As some have argued, it would also

changes that would improve outcomes for patients. For example, when recent

director announced plans for hospitals to have access to x-rays, ultrasound

scans and emergency general surgeries at weekends. These plans were met

with criticism by the British Medical Association who said: "a full NHS service

24 hours a day, seven days a week, is neither desirable nor feasible".67

local democratic leadership on public health matters.68 It suggested that the

government".69 As part of that it agreed with the Local Government Association

(LGA) proposals that local authorities should be granted enhanced powers to

food, tobacco and other physical and mental health issues) that go further than

prevailing national law.70 The shortcomings of the current arrangements are

thus well recognised but public health, while important, is only a small fraction

of the total health and care budget.

ifs, and - or butts" The Guardian

67 BMA, Best for patients, fair for

doctors, sustainable to the NHS

if the Trust got into financial difficulties but, having weighed up the risks, they

concluded that protecting healthcare services and jobs within Northumberland

was vital and was a risk worth taking.

for the Trust who had to obtain clearance from the Treasury, the Department of

Health and Monitor, the sector regulator for health services in England.

The result was that Northumberland County Council approved a £114

needed most - in front line healthcare. It is expected that this will lead to savings