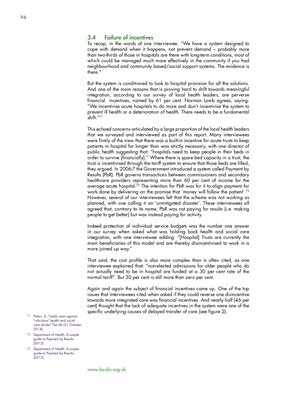 To recap, in the words of one interviewee: "We have a system designed to

cope with demand when it happens, not prevent demand - probably more

than two-thirds of those in hospitals are there with long-term conditions, most of

neighbourhood and community based/social support systems. The evidence is

But the system is conditioned to look to hospital provision for all the solutions.

integration, according to our survey of local health leaders, are perverse

prevent ill health or a deterioration of health. There needs to be a fundamental

that we surveyed and interviewed as part of this report. Many interviewees

patients in hospital for longer than was strictly necessary, with one director of

public health suggesting that: "hospitals need to keep people in their beds in

order to survive [financially]." Where there is spare bed capacity in a trust, the

trust is incentivised through the tariff system to ensure that those beds are filled,

they argued. In 2006-7 the Government introduced a system called Payment by

average acute hospital.72 The intention for PbR was for it to align payment for

work done by delivering on the promise that 'money will follow the patient'.73

However, several of our interviewees felt that the scheme was not working as

planned, with one calling it an 'unmitigated disaster'. These interviewees all

agreed that, contrary to its name, PbR was not paying for results (i.e. making

people to get better) but was instead paying for activity.

Indeed protection of individual service budgets was the number one answer

integration, with one interviewee adding: "[Hospital] Trusts are currently the

That said, the cost profile is also more complex than is often cited, as one

interviewee explained that: "non-elected admissions for older people who do

normal tariff". But 30 per cent is still more than zero per cent.

Again and again the subject of financial incentives came up. One of the top

towards more integrated care was financial incentives. And nearly half (46 per

72 Department of Health, A simple

guide to Payment by Results

73 Department of Health, A simple

guide to Payment by Results