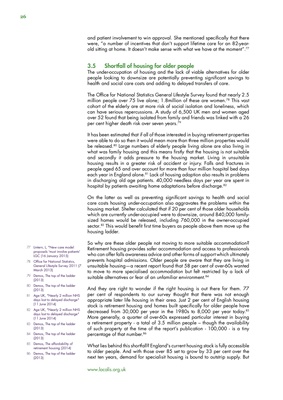 and patient involvement to win approval. She mentioned specifically that there

were, "a number of incentives that don't support lifetime care for an 82-yearold sitting at home. It doesn't

make sense with what we have at the moment".77

3.5 Shortfall of housing for older people

people looking to downsize are potentially preventing significant savings to

health and social care costs and adding to delayed transfers of care.

million people over 75 live alone; 1.8million of these are women.78 This vast

cohort of the elderly are at more risk of social isolation and loneliness, which

can have serious repercussions. A study of 6,500 UK men and women aged

be released.80 Large numbers of elderly people living alone are also living in

and secondly it adds pressure to the housing market. Living in unsuitable

housing results in a greater risk of accident or injury. Falls and fractures in

each year in England alone.81 Lack of housing adaption also results in problems

in discharging old age patients. 40,000 needless days per year are spent in

care costs housing under-occupation also aggravates the problems within the

housing market. Shelter calculated that if 20 per cent of those older households

which are currently under-occupied were to downsize, around 840,000 familysized homes would be released, including 760,000 in the owner-occupied

sector.83 This would benefit first time buyers as people above them move up the

So why are these older people not moving to more suitable accommodation?

prevents hospital admissions. Older people are aware that they are living in

suitable alternatives or fear of an unfamiliar environment.84

And they are right to wonder if the right housing is out there for them. 77

appropriate later life housing in their area. Just 2 per cent of English housing

a retirement property - a total of 3.5 million people - though the availability

percentage of that number.86

What lies behind this shortfall? England's current housing stock is fully accessible

to older people. And with those over 85 set to grow by 33 per cent over the

next ten years, demand for specialisit housing is bound to outstrip supply. But

79 Demos, The top of the ladder

80 Demos, The top of the ladder

83 Demos, The top of the ladder

84 Demos, The top of the ladder

85 Demos, The affordability of

86 Demos, The top of the ladder