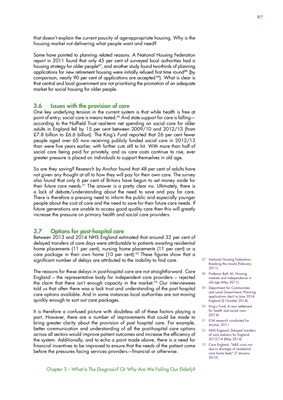 that doesn't explain the current paucity of age-appropriate housing. Why is the

housing market not delivering what people want and need?

Some have pointed to planning related reasons. A National Housing Federation

housing strategy for older people87, and another study found two-thirds of planning

comparison, nearly 90 per cent of applications are accepted 89). What is clear is

3.6 Issues with the provision of care

at point of entry; social care is means tested.90 And state support for care is

billion). The King's Fund reported that 26 per cent fewer people aged over 65

earlier, with further cuts still to hit. With more than half of social care being paid

for privately, and as care costs continue to rise, ever greater pressure is placed

on individuals to support themselves in old age.

So are they saving? Research by Anchor found that 48 per cent of adults have

not given any thought at all to how they will pay for their own care. The survey

their future care needs.91 The answer is a pretty clear no. Ultimately, there is

a lack of debate/understanding about the need to save and pay for care.

people about the cost of care and the need to save for their future care needs. If

increase the pressure on primary health and social care providers.

care package in their own home (10 per cent).92 These figures show that a

significant number of delays are attributed to the inability to find care.

The reasons for these delays in post-hospital care are not straightforward. Care

the claim that there isn't enough capacity in the market.93 Our interviewees

care options available. And in some instances local authorities are not moving

part. However, there are a number of improvements that could be made to

bring greater clarity about the provision of post hospital care. For example,

better communication and understanding of all the post-hospital care options

the system. Additionally, and to echo a point made above, there is a need for

before the pressures facing services providers-financial or otherwise.

markets and independence in

for health and social care

due to shortage of residential