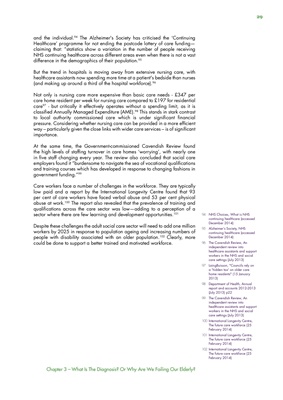 and the individual.94 The Alzheimer's Society has criticised the 'Continuing

Healthcare' programme for not ending the postcode lottery of care funding-

claiming that: "statistics show a variation in the number of people receiving

difference in the demographics of their population.95

But the trend in hospitals is moving away from extensive nursing care, with

(and making up around a third of the hospital workforce).96

care97 - but critically it effectively operates without a spending limit, as it is

to local authority commissioned care which is under significant financial

pressure. Considering whether nursing care can be provided in a more efficient

At the same time, the Government-commissioned Cavendish Review found

the high levels of staffing turnover in care homes 'worrying', with nearly one

in five staff changing every year. The review also concluded that social care

employers found it "burdensome to navigate the sea of vocational qualifications

Care workers face a number of challenges in the workforce. They are typically

abuse at work.100 The report also revealed that the prevalence of training and

sector where there are few learning and development opportunities.101

people with disability associated with an older population.102 Clearly, more

could be done to support a better trained and motivated workforce.

94 NHS Choices, What is NHS

96 The Cavendish Review, An

workers in the NHS and social

a 'hidden tax' on older care

99 The Cavendish Review, An

workers in the NHS and social