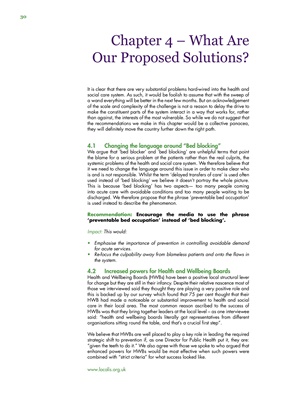 social care system. As such, it would be foolish to assume that with the sweep of

a wand everything will be better in the next few months. But an acknowledgement

make the constituent parts of the system interact in a way that works for, rather

than against, the interests of the most vulnerable. So while we do not suggest that

the recommendations we make in this chapter would be a collective panacea,

they will definitely move the country further down the right path.

4.1 Changing the language around "Bed blocking"

the blame for a serious problem at the patients rather than the real culprits, the

systemic problems of the health and social care system. We therefore believe that

is and is not responsible. Whilst the term 'delayed transfers of care' is used often

used instead of 'bed blocking' we believe it doesn't portray the whole picture.

discharged. We therefore propose that the phrase 'preventable bed occupation'

is used instead to describe the phenomenon.

Recommendation: Encourage the media to use the phrase

• Emphasise the importance of prevention in controlling avoidable demand

for change but they are still in their infancy. Despite their relative nascence most of

care in their local area. The most common reason ascribed to the success of

said: "health and wellbeing boards literally got representatives from different

organisations sitting round the table, and that's a crucial first step".

strategic shift to prevention if, as one Director for Public Health put it, they are:

"given the teeth to do it." We also agree with those we spoke to who argued that

combined with "strict criteria" for what success looked like.