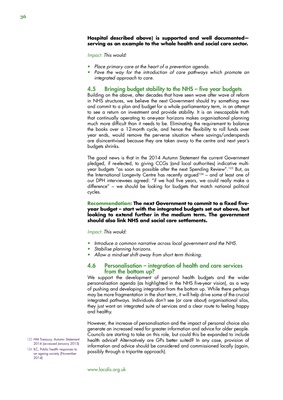 Hospital described above) is supported and well documented-

serving as an example to the whole health and social care sector.

• Place primary care at the heart of a prevention agenda.

Building on the above, after decades that have seen wave after wave of reform

in NHS structures, we believe the next Government should try something new

and commit to a plan and budget for a whole parliamentary term, in an attempt

to see a return on investment and provide stability. It is an inescapable truth

much more difficult than it needs to be. Eliminating the requirement to balance

the books over a 12-month cycle, and hence the flexibility to roll funds over

year ends, would remove the perverse situation where savings/underspends

pledged, if re-elected, to giving CCGs (and local authorities) indicative multiyear budgets "as soon as possible after the next Spending Review".123

our DPH interviewees agreed: "if we had five years, we could really make a

difference" - we should be looking for budgets that match national political

Recommendation: The next Government to commit to a fixed fiveyear budget - start

with the integrated budgets set out above, but

looking to extend further in the medium term. The government

• Introduce a common narrative across local government and the NHS.

• Allow a mind-set shift away from short term thinking.

from the bottom up?

We support the development of personal health budgets and the wider

personalisation agenda (as highlighted in the NHS five-year vision), as a way

of pushing and developing integration from the bottom up. While there perhaps

may be more fragmentation in the short term, it will help drive some of the crucial

However, the increase of personalisation and the impact of personal choice also

generate an increased need for greater information and advice for older people.

Councils are starting to take on this role, but could this be expanded to include

health advice? Alternatively are GPs better suited? In any case, provision of

information and advice should be considered and commissioned locally (again,

possibly through a tripartite approach).