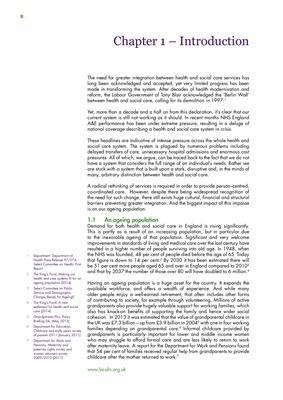 long been acknowledged and accepted, yet very limited progress has been

made in transforming the system. After decades of health modernisation and

between health and social care, calling for its demolition in 1997.1

Yet, more than a decade and a half on from this declaration, it's clear that our

current system is still not working as it should. In recent months NHS England

A&E performance has been under extreme pressure, resulting in a deluge of

social care system. The system is plagued by numerous problems including

pressures. All of which, we argue, can be traced back to the fact that we do not

have a system that considers the full range of an individual's needs. Rather we

are stuck with a system that is built upon a stark, disruptive and, in the minds of

many, arbitrary distinction between health and social care.

A radical rethinking of services is required in order to provide person-centred,

co-ordinated care. However, despite there being widespread recognition of

the need for such change, there still exists huge cultural, financial and structural

barriers preventing greater integration. And the biggest impact of this impasse

is on our ageing population.

Demand for both health and social care in England is rising significantly.

This is partly as a result of an increasing population, but in particular due

to the inexorable ageing of that population. Significant and very welcome

resulted in a higher number of people surviving into old age. In 1948, when

the NHS was founded, 48 per cent of people died before the age of 65. Today

that figure is down to 14 per cent.2 By 2030 it has been estimated there will

Having an ageing population is a huge asset for the country. It expands the

available workforce, and offers a wealth of experience. And while many

of contributing to society, for example through volunteering. Millions of active

cohesion. In 2013 it was estimated that the value of grandparental childcare in

families depending on grandparental care.6 Informal childcare provided by

grandparents is particularly important for lower and middle income women

after maternity leave. A report for the Department for Work and Pensions found

childcare after the mother returned to work.7

2 The King's Fund, Making our

settlement for health and social

7 Department for Work and