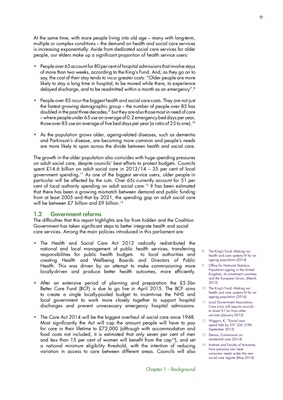 At the same time, with more people living into old age - many with long-term,

is increasing exponentially. Aside from dedicated social care services for older

people, our elders make up a significant proportion of health service users:

of more than two weeks, according to the King's Fund. And, as they go on to

say, the cost of their stay tends to incur greater costs: "Older people are more

likely to stay a long time in hospital, to be moved while there, to experience

delayed discharge, and to be readmitted within a month as an emergency".8

• People over 85 incur the biggest health and social care costs. They are not just

doubled in the past three decades,9 but they are also those most in need of care

- where people under 65 use an average of 0.2 emergency bed days per year,

• As the population grows older, ageing-related diseases, such as dementia

and Parkinson's disease, are becoming more common and people's needs

are more likely to span across the divide between health and social care.

government spending.11 As one of the biggest service users, older people in

particular will be affected by the cuts. Over 65s currently account for 51 per

cent of local authority spending on adult social care.12 It has been estimated

care services. Among the main policies introduced in this parliament are:

• The Health and Social Care Act 2012 radically redistributed the

responsibilities for public health budgets to local authorities and

creating Health and Wellbeing Boards and Directors of Public

Health. This was driven by an attempt to make commissioning more

• After an extensive period of planning and preparation the £5.3bn

local government to work more closely together to support hospital

for care in their lifetime to £72,000 (although with accommodation and

food costs not included, it is estimated that only seven per cent of men

and less than 15 per cent of women will benefit from the cap14), and set

a national minimum eligibility threshold, with the intention of reducing

variation in access to care between different areas. Councils will also 8 The King's Fund, Making our

Population ageing in the United

and the European Union, (March

10 The King's Fund, Making our

to divert £1 bn from other

14 Institute and Faculty of Actuaries,

How pensions can meet

consumer needs under the new